Tony Weatherman & Lindsay Magnussen where at the falls to have a couple of pictures taken by their friend, in celebration of their engagement. After the completion of their shoot I asked if they wouldn’t mind an extra picture for their album. As this would also help with my project, I had to ask… Standing on this rock, we pooled the light on them as to make the two our main focus in the image. Holding in his hand, Tony has a sign that reads: ‘Save Our Date, December 31st.’

Tony just returned from serving his Country in the military and being stationed in Afghanistan. He came home and asked his love to marry him– she naturally said yes and now they have their wedding date set. She moved to Sioux Falls for here work at Scheels, he followed to be closer to his new fiancée. They seemed like a happy, loving new couple and we wish them all the best!

Tony, Lindsay, Drake and myself standing out at Sioux Falls. 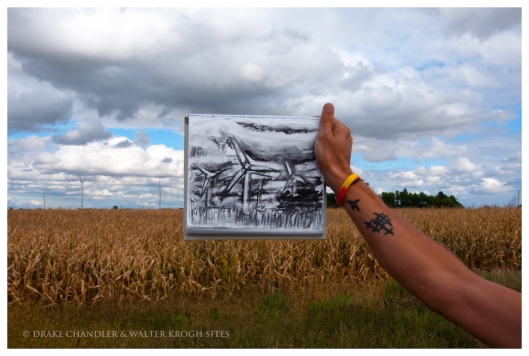 Here we felt this scene was a great representation of what most of the United States looks like. Lots of farm land, corn fields and as you move west, wind-farms. Since we are supporters of alternative energy such as sun or wind, we wanted a sketch of this. Here, you can see nature, farming and wind-energy all come together– a significant importance for this country.