In Boulder we visited a street fair. This was fun because Boulder locals are known to be very friendly and lay’d-back people. We met some amazing individuals that day, and not once did we come across anyone in a bad mood. We even witnessed some other interesting things that proved that even people completely opposite from each other, somehow can mange to live together in harmony. We also had a chance to see a Beatles cover-band perform. They sounded really good and the crowds were having a blast. People danced, laughed and enjoyed a few local brews from Avery Brewery. After driving so much, this relaxing atmosphere was precisely what was needed to re-fuel.

Below is a photograph of Richard, a Boulder man who has no last name. He is a man who enjoys to dance and loves the outdoors of Colorado. His philosophy is to not think about the future, or worry about the past. Live day by day, everyday and just enjoy yourself.

Richard, who’s lived here his entire life also likes to fix up bikes that the local college students toss out or leave behind when they return home after graduation. He takes these bicycles and after repairs are made, donates them to charity. This was an interesting perspective on Richard, as I was not able to get much information from him. He wore headphones the entire time we spoke, and while he was dancing to the Beatles cover-band– I wondered what it was he was actually hearing.

Here a picture of Richard, Drake and I in front of the stage. I’m enjoying a local IPA from the Avery Brewery. You can never go wrong with a great IPA and awesome music!

While enjoying our beers and listening to a Beatles cover-band, Drake began his sketch. Here you can see part of the stage and one of the members off to the right. We were lucky that he wasn’t being completely blocked by the gentleman in the blue ty-dy tee, who was dancing in his roller skates. 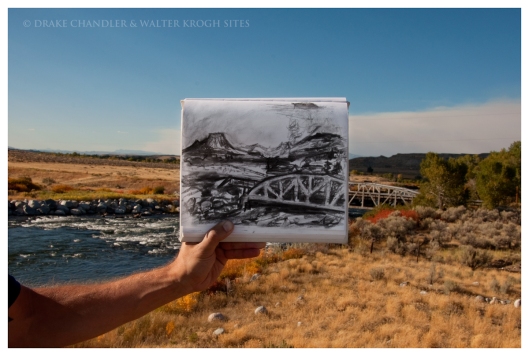 Above, on our way to Boulder, we found this location. We pulled over and relaxed a little while. Again, we had a beautiful day and couldn’t have been luckier!