We scored ourselves some tickets to a St. Louis Cardinals game. They played and won 11:06 against the New York Mets. This was quite an awesome experience, since Baseball is America’s past-time, and we love going to ballgames! Here, while working on the sketch we met some local people that joined in on the fun and hung out during the game. Melissa Canada, seen below in the photograph is also local to St. Louis and was willing to pose for the project. Guy & PJ, both friends of hers had a couple with us and laughed a great bunch. It’s funny to note that they have a bowling team called “Bumpn’ Ugleez.’

–> A brief history of the stadium coming soon!

We hung out at the bar overlooking the outfield for some time while talking to a fun bunch of people. We posed here for a Polaroid looking like a bunch of goofy kids… Melissa looks great though 😉

This perspective was perfect because it had a neer unobstructed view. Also, we were able to capture a couple of fans in the foreground. The Cardinals stadium was new, yet built to resemble a classic stadium. The red brick style architecture up against the green grass boasted perfect contrast. 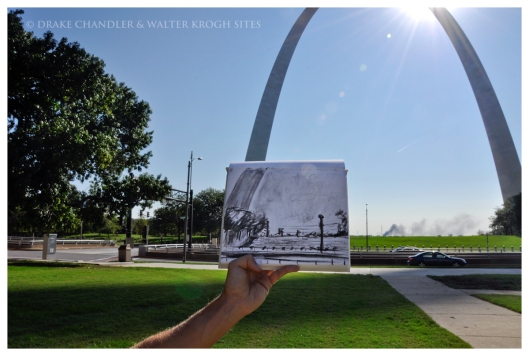 Above we are at the Gateway Arch in St. Louis. Unfortunately, this was all we had time to see besides the ball-park. We woke up hours behind schedule, and it was looking more and more like we were going to miss the Cubs game in Chicago all together. So, Drake made his sketch and we hit the road once again. The arch was built in commemoration of the westward expansion of the USA. It measures 630 feet and is by far the tallest man-made monument in the United States. It is located on the Mississippi River and is clearly visible from far away as you begin to enter the city. Standing under it had an almost dizzying effect on the eyes, It’s so large and the material reflected so much sunlight it almost hurt. We wish we could have ventured to the top, the view of the Mississippi and the city would surely have been amazing.